I've been playing around with the new switch type in TRS '06, and have managed to make a functioning animated stub switch! 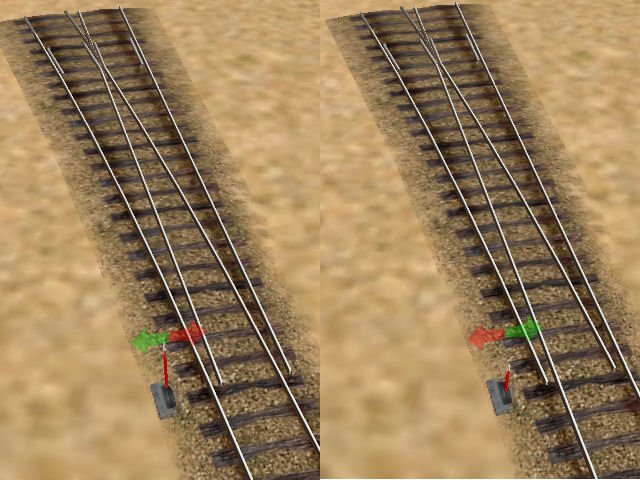 Now, this was just a proof-of-concept model, so it will need quite a bit of cleanup and additional work (make a frog, possibly guard rails, and change the lever to a harp switch stand), but it looks like it will be possible!

One issue I've run into is that it doesn't look like you can set the switch direction in surveyor. However, it does work on a hill, and you don't need to fiddle with invisible track & templates like previous versions.

(Yet another project to distract from the Moguls)
Top

Hi Curtis
It does look pretty interesting and you're right, it does need a frog. However, I have been very curious about the placement of the switchstand making sure it works proper each and every time. Once you make it's placement would you specify, somewhere close, as to where the switchstand should be??

Some of the locos don't like where I put them and go the other direction from the intended one and then I have to go back and move it.

Ken
"Floundering Around in Mediocrity For No Particular Reason...."

Yep, a frog would be good. You will also need a harp switchstand. Once you have that, you can get rid of the silly arrows. Just keep in mind that harp switchstands indicate the opposite of what you'd think (swing to the left, go on the right path; swing to right, go to left)
Cheers,
Ben
Top

Yeah, unfortunately, this function is only supported in '06 and later

Just keep in mind that harp switchstands indicate the opposite of what you'd think (swing to the left, go on the right path; swing to right, go to left)

Yep, that's what I was figuring. However, I saw a diagram of a harp switchstand yesterday that looked like it had another lever in the mechanism, so that the target would face the path of travel. I don't know if that was ever built, or what the common configuration was; I'll need to look at prototype photos & see what they show, most likely. (And yes, the silly arrows will go away


However, I have been very curious about the placement of the switchstand making sure it works proper each and every time. Once you make it's placement would you specify, somewhere close, as to where the switchstand should be??

The switch stand is built into the model, so it won't be able to be moved. I might be able to script it so the user can pick which side of the tracks the stand is on, however.
When I get the switchstand in, I'll post a prototype for download, so you can see if the stand is in a good location. I'll also post the gmax files, in case anyone wants to make narrow-gauge versions.

Nice bit of work there!
It certainly looks spot on for any V&T layout.

Now I know it's just at proof-of-concept phase...but I'll ask the following on behalf of all the WP&Y fans out there: Any problems with or plans for doing a 36" version?

Dreadnought, Pencil covered that in the last sentence of his latest post.
Cheers,
Ben
Top

No immediate plans for 3' versions; though I may do a set of 30". Depends on how fast I burn myself out

And Ben, all the pictures I saw last night show a straight bar to the rails, so yes, the target will be facing the blocked track.
Top

Wow - I can't believe it's been this long since I've played with these.....
Anyway, I updated the above picture to show the current status - I've added a frog and guard rails, but haven't finished the switch stand yet.
Top

Unfortunately, it looks like a small but increasing amount of my content will be for TC3. There are just too many improvements in certian areas of the game; especially around mesh-reducing track, steam engines, and splines.
Of course, this is all dependant on TC3 being a stable program, with no new major bugs

Boy, I sure hope so, but probably not.
Norm
Top 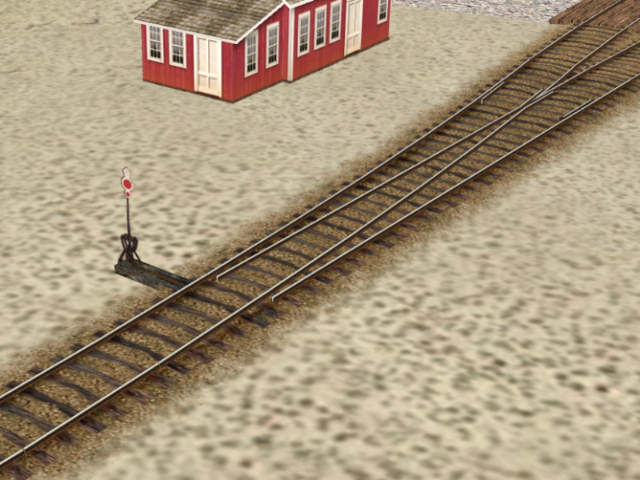 I have the scripting working so that you can move the switch stand to the other side of the track, but you still can't set the default direction in surveyor.
Top

I don't know much about stub switches, but with the way the stand is now, wouldn't the target indicate the direction? Throwing the target to right would pull the points against the rails and direct the train to the right, or am I completely backwards?
Norm
Top
Post Reply
46 posts

Users browsing this forum: No registered users and 7 guests