I seriously doubt that any Stevens products ever wore Caledonian blue. As I said, that was a factory paint scheme - by all accounts, the CP may not even have had those colors on hand. As far as I can make out(feel free to correct if you have solid information saying otherwise)

As-built scheme, brown above the running board, black below. Much like the scheme Columbus and Dayton wore, and the scheme that my nos. 19 and 177 are in. 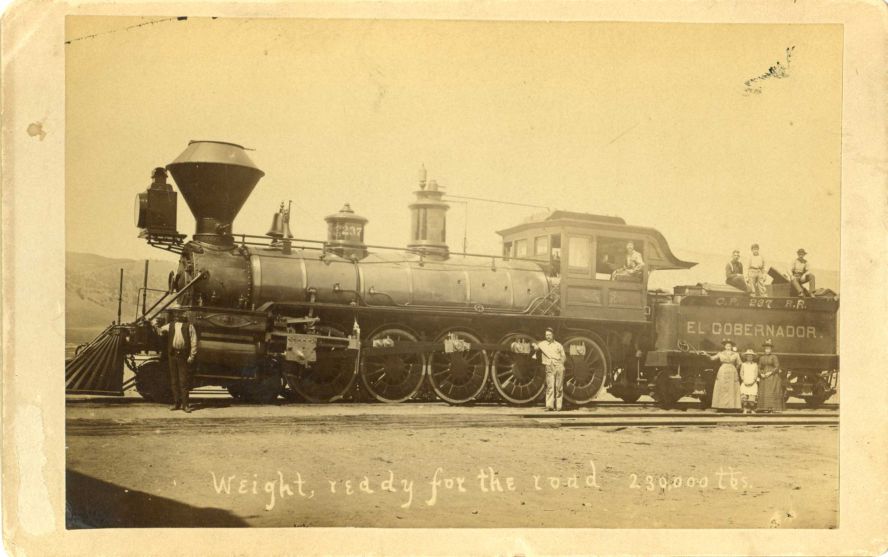 Ca. late 1880s, just post-Stevens. Black with gold lettering, similar to the scheme shown in the last pic of the 4-6-0s here.
The last era I don't have a shot for, but as far as I've been able to make out, her last livery would follow this guide: This would be after the renumbering, and El Goob may have very well lost the name altogether at that point. CP started painting their engines like this a little earlier - that diagram is from 1896 - but certainly that's the livery in which El Goob was disassembled.
Top

No doubt you are right and I was just wishful thinking although I would have sworn I saw a photo that had the exact lettering as the Jupiter I can not find it now. I'm sure you have these but I'll throw them in.

This is from the California State Railroad Museum Library and is dated 1883 in front of the Sacramento shops which might make it a builders photo.

This one is from the Marklin Club of all places but appears to be the same location.

I was wondering if this loco was able to cross Donner Pass and ran across this comment. "the flexibility of the front truck and the rear drivers plus blind drivers on the 2nd and 3rd axles gave the locomotive the ability to take any curve on the Central Pacific System" There was no attribution but I thought it interesting.
Top

In any case I'm sure the engine will look amazing whether it be in black or brown colors.

Daniel is correct. The Caledonian Blue scheme was used by Schenetady only. It was meant to be a tribute to the management's Scottish homeland (Caledonian Railway). Brooks and Rogers did turn out blue locomotives early on, though they may have been different shades of blue and crimson. In those days every builder turned out products in schemes specific to their company (unless ordered in a different scheme).

The closest thing CP operated to a Steven's locomotive in that color would have been the 4-6-0s they ordered from Schenectady. I can't find a photo of one of them at the moment, but here is a colorized view of a Rogers 4-6-0 at Rocklin in a familiar scheme.

Central Pacific operated an assortment of paint jobs early on and eventually settled on an Eastlake inspired brown scheme by the early 1870s. The original scheme had some scroll work on the domes and tender which were applied only to the locomotives painted early in the 1870s.

Here is the same locomotive, repainted to the CP standard scheme.

Incidentally, the mid-1880s was a time of color change on the CP as the passenger equipment colors changed from Yellow to Tuscan in 1883. At the same time, cabooses were changed from Yellow to "Red" which may have been a bright red, or more likely a variation of the mineral "red" color used by the SP in the 20th century.
Top

Was waiting for that response, although I've no doubt any number of Stevens products would have looked fantastic in blue and crimson...
Interestingly, I am wondering, given the earlier builds of Jupiter and its brethren, that the blue may not have been rather light, lighter even than the blue on the Promontory replica. Fans of UK steam will remember that the early Caley liveries were much lighter blue and scarlet, due in no small part to the fact that their blue paint faded very quickly. The more favored dark blue for which the Caledonian Railway is now famous wouldn't have come about for another decade or two. Incidentally the B. R. suffered the same problem when they tried developing an "Express Blue" which is why their Ultramarine and Blue liveries lasted such a short time.

Did some more work on El Goob yesterday, but only for performance's sake(and a little rebuild work). I rebuilt the pilot and trailing wheels to be more accurate (they will become my new standard, as their shape is a good deal better) and cut polygons out where possible to try (and so far, fail) to make the massive locomotive less polygon-happy. Currently it stands at 167,523 triangles in Blender - roughly equivalent to a C&C 4-4-0 with a C&S mogul coupled behind.

A. J., I'm thinking of looking into a separate (temporary) site to host payware while Trainz Forge seems immobile. It would be a good way to net some income, especially since I'm now paying for gas.

I'll post here if any developments occur in that department.
Top

The blue used by Schenectady is very specific, dark Prussian shade used by the Scottish 79th Infantry during the civil war, and roughly the same shade as the Scottish flag. The current shade worn by the Jupiter was chosen in the 1990s before Jim Wilke was able to research Schenectady's practices fully. Jim suggests the color should be closer to that used by the 79th Infantry on their flags and uniforms.

The use of "Crimson" to describe the color as written by the Sacramento newspaper (and others) comes at a time when "Crimson" was associated with blood and plants such as cranberries or tomatoes.

Several years ago Jim Wilke and Jon Davis (who made locomotives for MSTS) released a rendering showing a more authentic Jupiter scheme:

Research into the exact scheme is still ongoing, Schenectady didn't leave a color book for us like Baldwin did.

The use of blue and crimson has been nailed down except for one place: The drivers. According to Jim there was a stylistic trend in that era for locomotives. Generally, only locomotives with 60" or larger drivers wound up with flashy red drivers. It is possible the Jupiter had blue drivers (with a red sunburst and striping). It is also possible the colors on the headlight were reversed.

Where is that time machine and cooler full of Kodachrome slide film when you need it?
Top

Fascinating. That probably takes out the link to the Caley, considering that the earlier scheme is not at all "Prussian":

Going off that, I would say the similarity is likely coincidence, since the color scheme is very different.
Top

Do you know what the factory colors for Mason were? Most of the models I've seen were in either darkish green or royal blue.
Top

Mason used blue through the 1850s and into the 1860s. Shortly after Mason built the "Highland Light" in 1867, he was pleased with the appearance and made the scheme more or less the standard for all locomotives they built. There were exceptions of course, some larger railroads began moving to black as the base color in the 1870s. Much like Baldwin, if you didn't specify paint instructions, you got what the factory was turning out.

There is one interesting detail that Masons had in common. Mason painted the locomotive frames black, regardless of the color of the locomotive. This is different than Baldwin practice where the frame was painted to match the rest of the locomotive (after 1874). In the 1880s Mason may have switched to a brown shade as the base color, I am not certain on that. The big 2-8-6 bogies built for the DSP&P were reportedly a chocolate brown when new.

I wish I had an up to date rendering of what a Mason looked like. There has been information uncovered in the past few years that filled in little style details. The most important was Mason's use of red as a trim color. Mason painted many of the edges on castings and other places on the locomotive in red. You can see some of this in the "Highland Light" lithograph, particularly on the trucks.
Top

Oh, excellent, that clears that up nicely and means that in all likelihood first half of Cal.P.'s locomotives were in the blue livery and the second later half might have been in green. I rather favored the blue scheme shown on the cover of Mason Steam Locomotives by A. W. Wallace of the Bogie San Juan.

Ha! It dawned on me we might have the San Juan in trainz

I really do enjoy reading these discussions about period paint. I like learning about what was appropriate and when.

The artist in be loves the more colorful schemes, and although green was used by Mason I couldn't help but imagine one of C.P. Jupiter's sisters in that Highland Green scheme. It would probably be quite becoming, even if not totally period accurate.

I like to try and stay true to era with my own paint schemes, though there are some exceptions. Such as the colors I'm working on for the Mojave & Panamint RR. I'm not sure how accurate they would be for the turn of the century, though I hope they're at least close.

And Trainboi, keep us posted if you find another hosting site for your payware. I'm VERY interested in those C&C locomotives, though I'm sure you already knew that.

Togog has done some good work on his locomotives, though the engine specs he uses are miserable.
He also had help from yours truly to get the colors right.

There is a nice color rendition of the "San Juan" on PacificNG done by David Fletcher. Though it is lacking much of the ornamental red.
http://www.pacificng.com/ref/mason/pdf/ ... ril-09.pdf

The only thing totally gets my goat is that font he sticks on the tenders. Playbill is NOT an acceptable font for locomotives or building signs, it was used in print advertising and playbills. A simple block font like this: http://www.dafont.com/college.font would be more appropriate.
Top

My only cravat about togog's locomotives is his lack of scripting, most don't have water, coal/woodfuel, sand, or ash nor do they have scripted front couplers but boy are they gorgeous!
Top

My only cravat about togog's locomotives is his lack of scripting, most don't have water, coal/woodfuel, sand, or ash nor do they have scripted front couplers but boy are they gorgeous!

I have to agree with you there, and the same can be said for his rolling stock. Shame they are not industry active.
Eat Yer' Beans...
Route Building A.D.D!! Some Baldwins of a different stripe.
Top
Post Reply
174 posts

Users browsing this forum: No registered users and 17 guests