Hey all,
I had to check a couple times to make sure Curtis hasn't already started a thread for his Promontory route and rolling stock, but as I couldn't find one, I am creating a place to illustrate progress on some of the project. I have been doing a new version of UP Nos. 116-120 for the purposes of replacing the 2006 ones, and I think it is coming along rather well:

Nice work! This project I've been posting over at pacificng, as there's a small collection of CP-interested people over there; and it grew out of a post someone made over there last year.
http://www.pacificng.com/forum/viewforum.php?f=38 for most, though there's some stuff in the prototype section also....
Top

The UP platform cars are just about ready to upload:

UP platform cars are on the DLS. CP cars are coming soon:

Thanks, Harold!
I think the water car is done, also.... 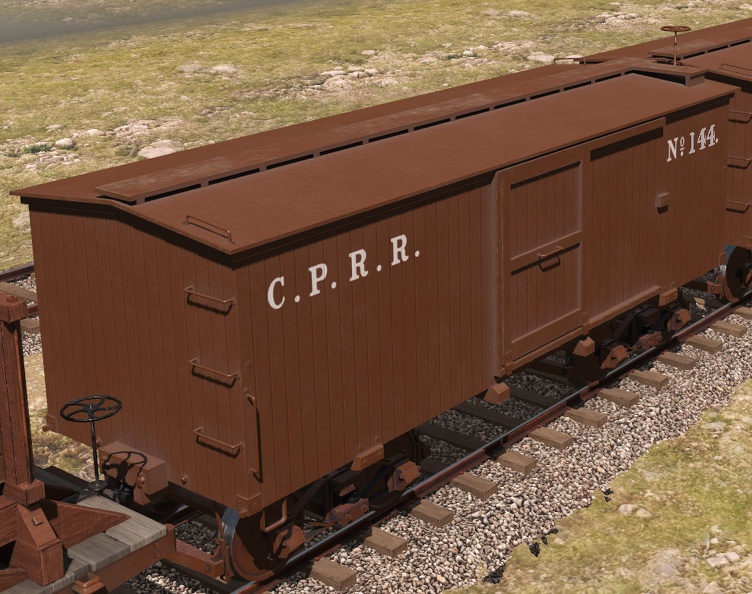 The UP Caboose is on its way to the DLS:

I honestly feel bad for not having TRS19 to be able to enjoy all this neat stuff you guys are putting out for the 150th...

Welp, here's hoping I'm able to upgrade by May, and at least I got dis.

And yes, the model is real. Made by ZheGermanFlo and is downloadable from here: https://flohollaender.wixsite.com/heritagerailway3d

Nic, you'll be glad to know that TANE versions of the engines are still going out. They don't look quite as nice because of the lack of PBR and good rolling stock, but they should tide you over unless/until you upgrade.

Having done Jupiter and 14 UP locos, next priority is Antelope:

It should be working in game by early next week, at which point I will hopefully have improved lettering to be able to do Storm/Leviathan/Jupiter and the rest.
Top

Users browsing this forum: No registered users and 14 guests