Greetings all! I'm Kegg_Works and I just recently signed up to this forum. I've been a Trainz user for quite some time, since 2005. Though I lost a computer and have not been able to play it again until recently and picked it up again a few months ago. I have yet to make the upgrade from TRS06 to TRS12, though God willing I can make that change soon. I joined this forum because this seems to be the niche for Trainz users who focus on old time and turn of the century railroading. And that's all that I'm really interested in. Most of my interests revolve around narrow gauge, though there are a few standard gauge interests to. And as a Trainz player I think my favorite aspect of the game is route building and that's where most of my time playing the game goes. And trying to find additional content to add to the game to aid in said route building.

Anyway, since I'm new to the forum I thought I'd give a small introduction and start things off by introducing a collaborative effort I'm working on. Ladies and Gentlemen, or whichever may apply, may I present the Fiddletown & Copperopolis! Some of you may recognize the road name, as it is a most "Uncommon Carrier", pun intended. Sadly I do not have and pictures of the route, as it's only just getting started, but I can share what the route is, and what it will become!

The route is to be a virtual recreation of Carl Fallberg's cartoon series revolving around a fictional California narrow gauge line, though running between the two real life towns of Fiddletown and Copperopolis. The cartoons take many of the issues, challenges, ect... that many TOC narrow gauge lines had to contend with and exaggerate them in a very light hearted and humorous way. I was fortunate enough to find Carl's book at a model train show for $10. "Fiddletown & Copperopolis: The Life and Time of an Uncommon Carrier". 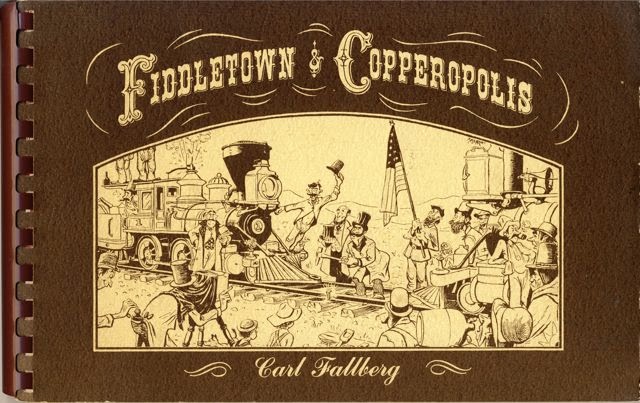 (As a side note, the edition I have has a full color cover)

It's a wonderful book and has quite a few laughs between the pages. I sincerely urge you to find a copy for yourselves, especially if you appreciate old time narrow gauge! Here are a few of his cartoons and I'm sure you'll enjoy them.

The objective in creating this route is to stay as close to the comic as possible, and still have an enjoyable route. Emulating the same humor of the railway's creator, Carl Fallberg. Conveniently Mr Fallberg also included a map of the whole line, including towns, stops and branch lines. If you are a lover of twisting, winding, and snaking its way through rugged mountains and serving many towns and mining communities then you'll love the F&C!

This route is a collaborative effort, so far it's just myself and a friend. He's handling the track work and I'll be handling terrain and scenery. However, anyone is welcome if they would like to pitch in! any and all help would be welcome. Presently the equipment to be used on the route would be Togog's wonderful narrow gauge locomotives and rolling stock.

The F&C's locomotive roster is mostly 4-4-0s and 2-6-0s, with a few 2-8-0s and a Baldwin 0-4-2. (#13 and it's apparently a hoodoo engine to) Togogs engines and freight cars are perfect for the route, where as Elvenor's passenger equipment are best for folks traveling along the line. If anyone is skilled at reskinning models we'd love to have you on board for the F&C!
There is no clear locomotive roster, but I estimate at least 14 to 15 engines. I plan on making a roster based on what is seen in the comic/cartoons.

I reckon that's about all for now. The track work should be done within the week or so, give or take a few days. Meanwhile I'll see if I can get some screen captures for you all. Sorry it the first post is a bit long, I wanted to make a good impression and I hope I've peak your interest in this route!
Eat Yer' Beans...
Route Building A.D.D!!

That's a very interesting route - thank you for the link to the book and the images! Welcome; and I look forward to seeing progress on your route!

I'm rather eager to see progress myself. The hard part is waiting for my friend to finish the track work. I should receive regular updates on that progress and will post them here as soon as I get them. In the meantime I'll be working on a locomotive roster that I'll post here as well. Although not immediately relevant to the route, I think it would be a good reference for ,later.
Eat Yer' Beans...
Route Building A.D.D!!

I (finally!) got a copy of this book. You're right, it does look like it would make a fun route! Have you had time to do any more with it?

Well that goat on the depot is pretty obviously a 0-2-0T Porter.

Lots of those around in just about any gauge you want.
Top

No. 1 at least looks like a Rogers to me, it's got their style of sand dome from what I can tell. Can't see any other numbers well enough to comment.
Top

Have you seen Kegg_Works movie?

Yes, that's a neat movie. Some of my content in the video looks like it could use a refresh, though.....
Top

Hey, sorry for the delay in response. Yes, the F&C Ry is 3ft gauge, and I say your estimated roster is pretty close, Curtis!

I have to agree that I was wondering if No. 1 was 4-4-0 or 2-6-0 myself. Though I like the rebuild theory about the ollision with the infernal cmbustion contraption.

As for #13, it is an Baldwin 0-4-2T. The engine that somehow gets on the station roof seems to be more like an 0-4-2T Porter. Look closely and you will notice it doesn't have the steam dome next to the sand dome and it has a different headlight if I recall correctly.