Not to be a pest about T:ANE

Not to be a pest about T:ANE

Tried to get your equipment into TANE and most errors out, like most equipment.

Esmeralda almost made it but she's naked:

No problem! Yes, TS12 seems to have the same issue with the boilers. There's a beta version of a fixed mogul at http://www.carsoncarshops.com/beta.htm which should work a little better, although I noticed it's bell was still invisible on one of the latest TANE builds......
I've been slowly working through the content with errors and updating them, though I've been intermixing that work with new projects also.

The bell needs to be re-exported from Blender also. For some reason, the newer versions of Trainz don't like the tbumpenv materials from GMAX (or at least the way I used them

). The major holdup is redoing the rope animation. It should only take 30 minutes or so, but I've been procrastinating.
Not the least of which is that I imported Mike Collin's mogul drawings into Blender, and it appears my model is about 5% too small. And the domes have the wrong profile. And the boiler profile is off; especially around the cab. And, and....
So, now I'm redoing it again....

I'm having the same problem with the combination boxcars. What started as a simple repaint / fix the .texture file error in TANE has turned into a complete rebuild of both the car and the trucks....
Top

For the best, I'm sure. I look forward to the finished model(speaking of which I should probably fix the lining and environment maps on the larger ones).
Top

I drifted over here to post a picture very much like the OP. But I see you are all on top of that.

So here is another problem.

It looks as though the brass work has got the dreaded pinkngreens.

Only on the tender but of course it could just be me.
Top

I see that as well, I'll need to get back to those engines and finish them up. I'm down to 75 items showing errors in TANE now.
It would go faster if I didn't feel the need to update / improve each of the models / textures.....

Better to do it well than hurry through it, besides so far as I can tell TANE is still in its early stages. Who knows what they will change. Are you going to be able to reproduce that lovely shiny boiler? I've always felt that weathering was inappropriate on locomotives of this era. Back when they were the main motive power the railroads took very good care of them. Labor was cheap and the locomotives were their main asset other than the land. UP actually used gold leaf on their passenger locomotives and silver leaf on their freight haulers.

Thanks for all your hard work Curtis.

I have not even bothered to check how many of my few assets on the DLS are defective since I know I can't do anything about lod levels or anything.

I'll leave them at build 2.9, there are way more people using earlier versions than have moved to TANE. IMO and honestly with my eyes I can't really see much difference except the shadows. In fact I've managed to crash TANE once with having way too many engines on screen at once, something both TS12 49922 and SP1 were able to handle. Same engines, same route. I'm not impressed.
Top

OK, new version on the beta page.
I (finally) got the vertex animation working for the bell rope, and tweaked the texture reflections. I'm also using the new bell code built into TANE, so the bell won't animate in previous versions. On the plus side, because I removed the bell code from my script, the mogul *should* work (albeit with a static bell) back to TS2009 SP1 by just changing the build number.
Not quite ready yet for release; I still need some work on the lods to get reduce the whole shebang to less than 500 polies at the lowest lod. Also have a little more texture updates.
I haven't touched the tender yet; that's next.
Top

That's a mercy, Curtis, I look forward to seeing this in-game(albeit in TS12...I'm probably going to rip your script out completely in favor of LilB's...

Pencil42, I noticed on all of your knuckle coupler rolling stock that on one side of the car the coupler is on backwards see.

Yeah, it's a bug in TANE (TANE is ignoring the rotation of bogey attachment points). It's fixed in some of the newer test builds, so it *should* be fixed in the next official update.

OK, I *think* this is it for the mogul (as long as I didn't miss anything....)
New version posted on the beta page; the tender is now fixed as well.

Someday, Dan, I'll need to sit down with Lib's scripts and figure out how to implement them. It appears there are quite a few nice effects in them 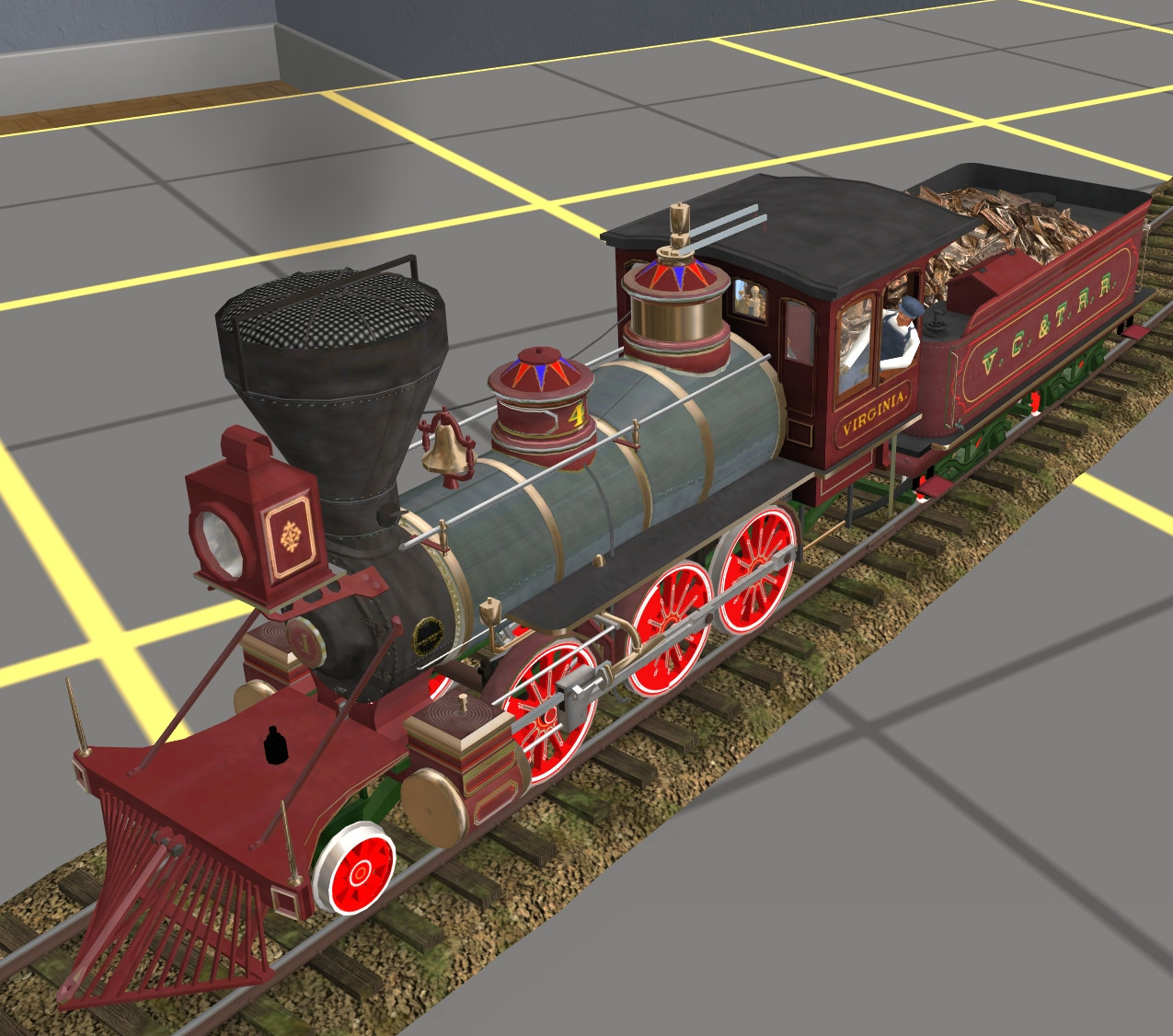 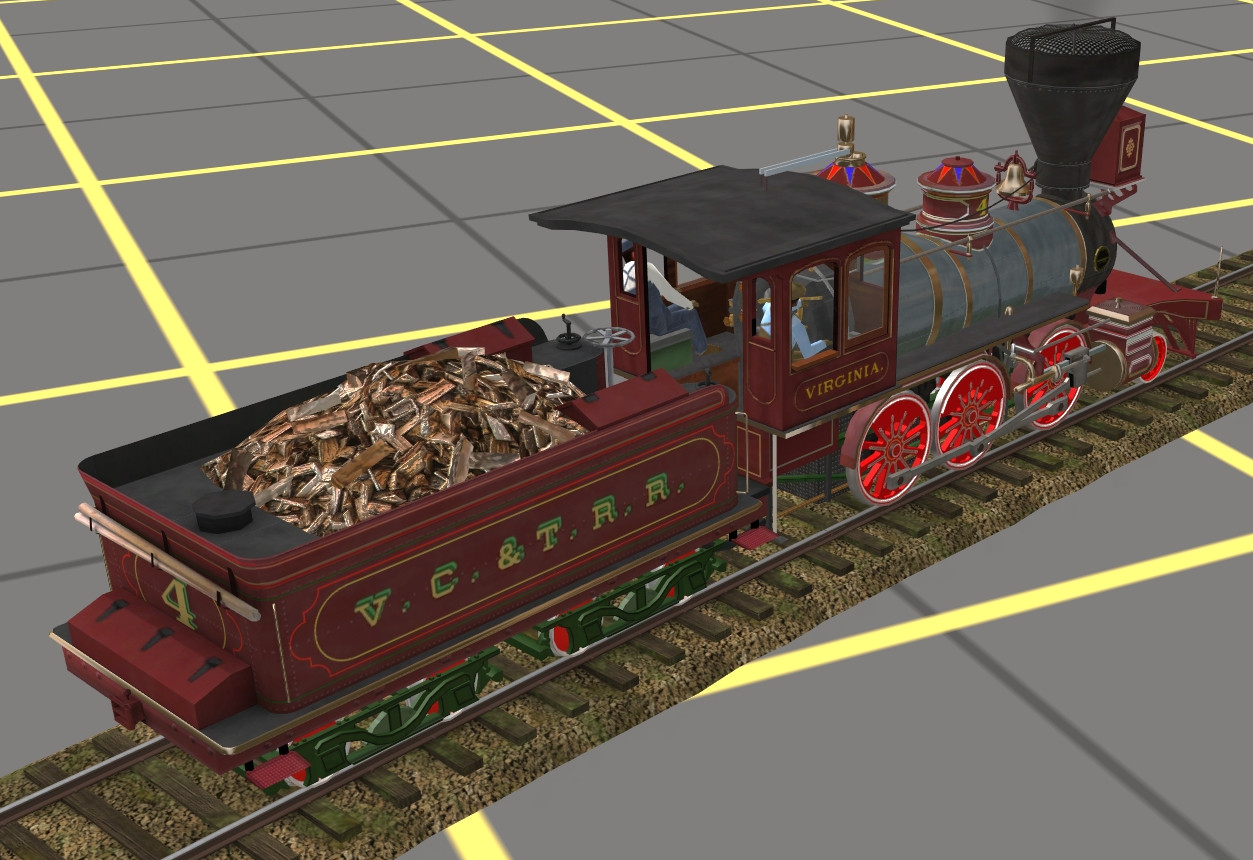 Don't know how I missed this update but better late than never...

Looks and sounds great! Bell animation is cool but, as you've noted, the bell does just stop in mid swing. Gotta tell that wiper to oil those bearings.

BTW, I did notice the change on the dome tops. They remind me of one of the narrow gauge steamers from OZ. It had a similar pattern.
Top
Post Reply
25 posts