I've been nagging Curtis about making a few minor adjustments to some of his early rolling stock into slightly more accurate representations. The first two cars I've been researching are the 30' flat cars used in the 1860s and later.

I have been unable to find much in the way of early UP freight car rosters. I am sure references must exist, but UP since isn't my forte, I don't have them in my library. Thankfully many early UP images are available online in the public domain. The Library of Congress, DeGolyer Library, Online Archive of California and other sites are treasure troves for these old photographs and stereoviews.

400 - 999 (full number range unknown) Series.
These cars share some similarities with the existing UP flat model. The car is probably a 24' with tapered side sills and "captured" end sills. This style of car was also used on the CP and may have come from the same builder. A captured end sill means the end sill fits between the side sills, rather than the full length side sill more commonly used.

The trucks under these cars look very similar to the "Kimball" style truck used under V&T cars, with the addition of heavier spring planks and a leaf spring instead of the coiled spring.
Top

Interestingly enough, in the view of the Laramie shops, the frame of one of these short cars was being assembled in the foreground.

The sill closest to the photographer is the outside sill, showing the characteristic rounded end used on captured sill cars. Just behind it the two center sills are visible, with the end sill resting on top. I can also spot both bolsters, the needle beams and what appears to be a brake beam.

So do you think only 2x center sills, for a total of 4? All the flat designs I've seen have had 6x sills, including the contemporary 24' V&T flats built by Kimball. Not that anyone looks underneath these models anyway

On second look, I suspect they were six sill cars with two truss rods.

I'll get to work on some lettering...

OK, thanks! The bolster design looks a little different than the Kimball version, and my brake wheel looks too big. Also, it looks like there might be brakes on only one of the two trucks, or am I just missing something?
Top

Brakes one a single truck was common in the earlier days.

The bolster design is different from the Kimball cars but more commonly used by other car builders.
Here is an example of a similar design used by the V&T on the restored B&B flat in June Lake, CA.

Thanks! White's freight car book has a nice drawing of a similar bolster. It appears to sit a little lower than the Kimball one; not sure if I should raise the flat so it sits on the trucks the same way, or decrease the diameter of the wheels so the truck sits lower.... I may also be able to take some height out of the truck spring planks?

Looking at various photos, it looks like some cars had two sets of brakes, and some only had one. It would make sense; one set of brakes was common during the Civil War; we're likely seeing the transition point here.
Top

OK, making (slow) progress - the bolster is better now; as is the flat deck....

Sitting on CP trucks for now, but that too will be fixed....
Top

So far it looks amazing!

I am not sure whether I should be excited or terrified. How about both?
Top

I am not sure whether I should be excited or terrified. How about both?

I would say your answer is Yes!

Playing with procedural texturing in Blender in order to revamp the cordwood load: 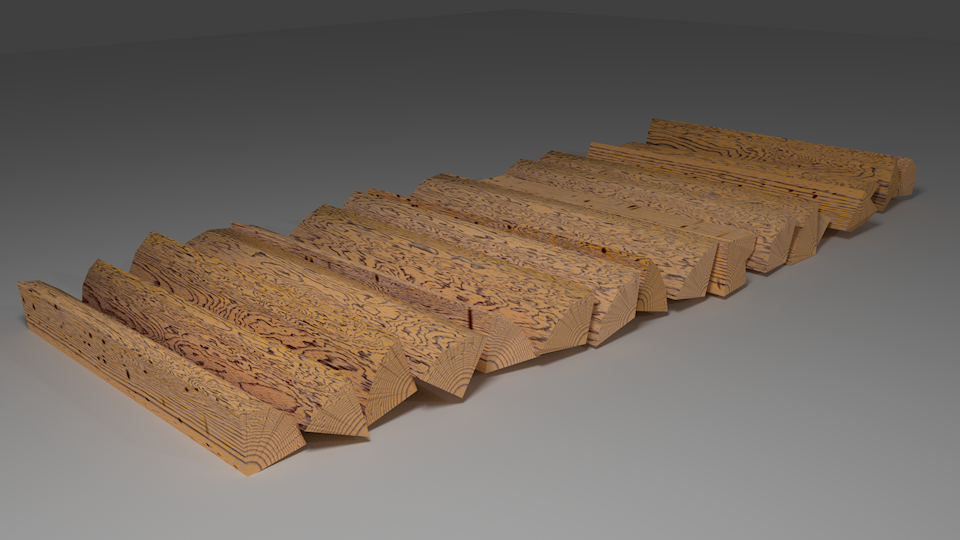 Actually what's the system you're using for that? It looks really great...will have to try it myself.
Top

I'm using Cycles - I started with this tutorial here, then added some random shading to the colors. I still want to play with it a bit, but it shows promise.
Top